Colored Beaches on the Big Island of Hawai’i

Colored Beaches on the Big Island of Hawai’i 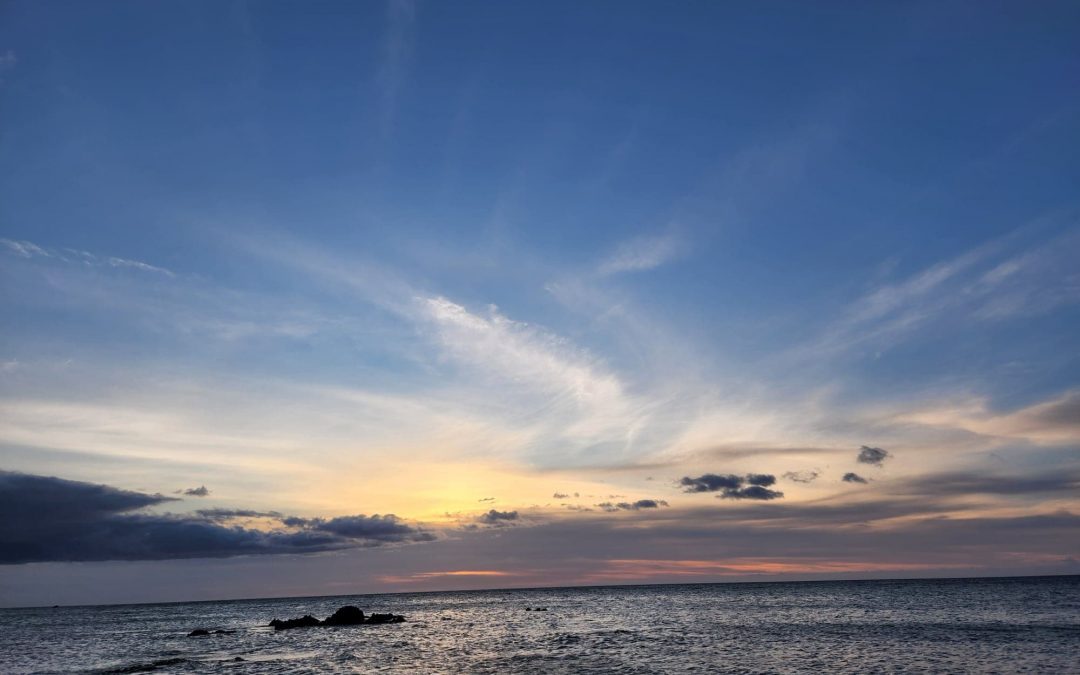 Aloha!
Our student worker wrote this awesome blog about beaches on the Big Island. You can learn how the local people enjoy the beaches.

Hi everybody, it’s me, Jessica again here. Today I want to talk about three cool and unique different colored beaches the Big Island has to offer. Most people have the idea that all of the islands in Hawaii have white sandy beaches. However, the Big Island has three different colored beaches (including the popular white sandy beach) that not only the tourists enjoy but also are some of the local favorites.

The first one is the well known white sand beaches. These beaches can be mostly found on the west side of the island on the Kohala-Kona coastlines. Some of the popular and local favorites are Hapuna Beach, Waikoloa/Anaeho’omalu Beach, and Magic Sands. At Hapuna Beach you can enjoy many different active water sports such as surfing, swimming, and snorkeling with the very active waves. At Waikoloa-Anaeho’omalu Beaches you can enjoy more of the tranquil atmosphere and calm waves while relaxing on the white sandy beach chatting with others, sun-bathing, or just chilling. And finally, at Magic Sands you can enjoy the ever disappearing and appearing shoreline depending on the season. During the high winter surf the sand is carried away by the waves, and then is brought back again when the tide changes. 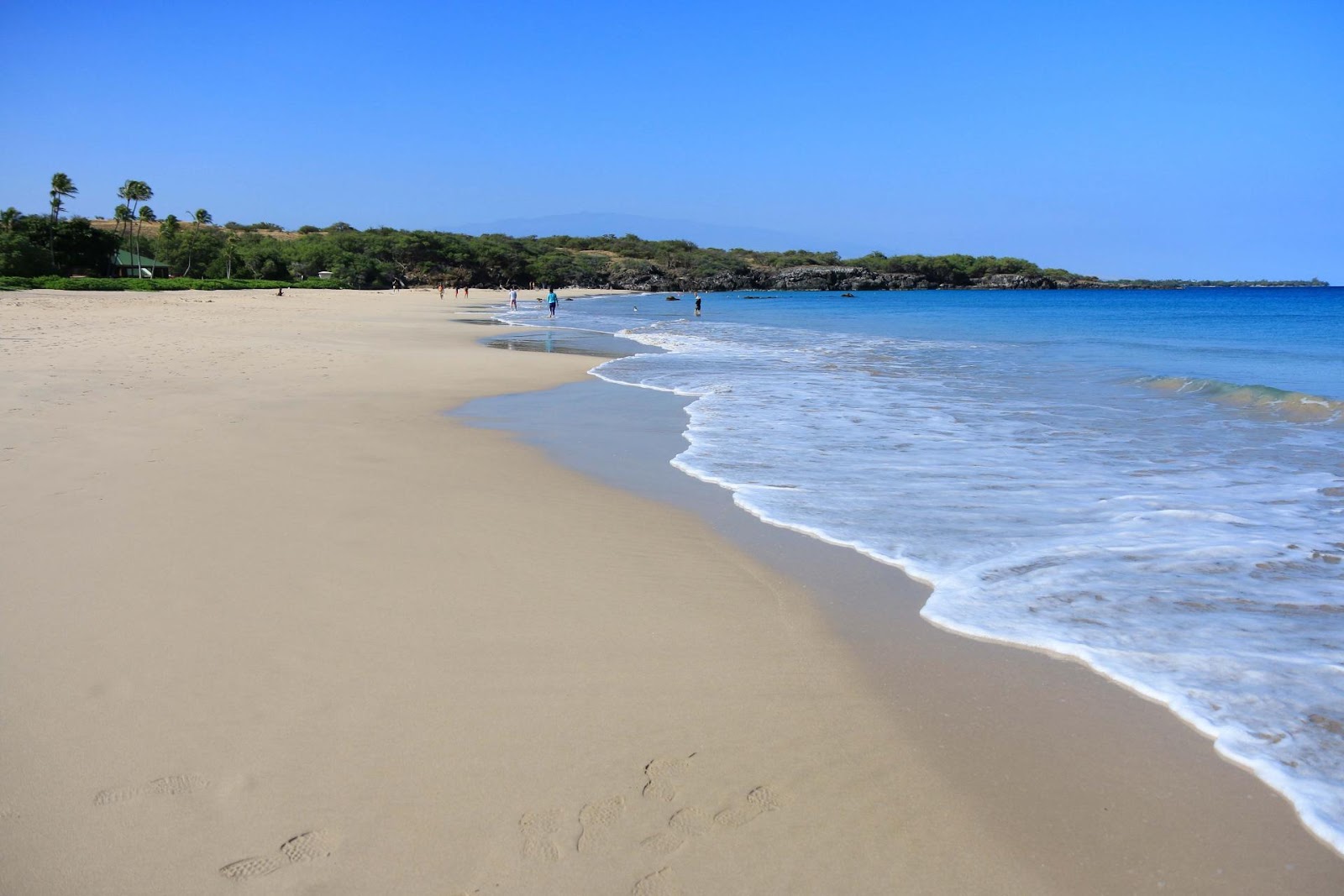 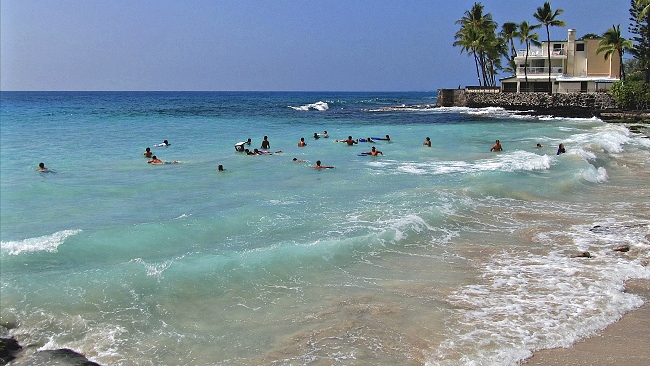 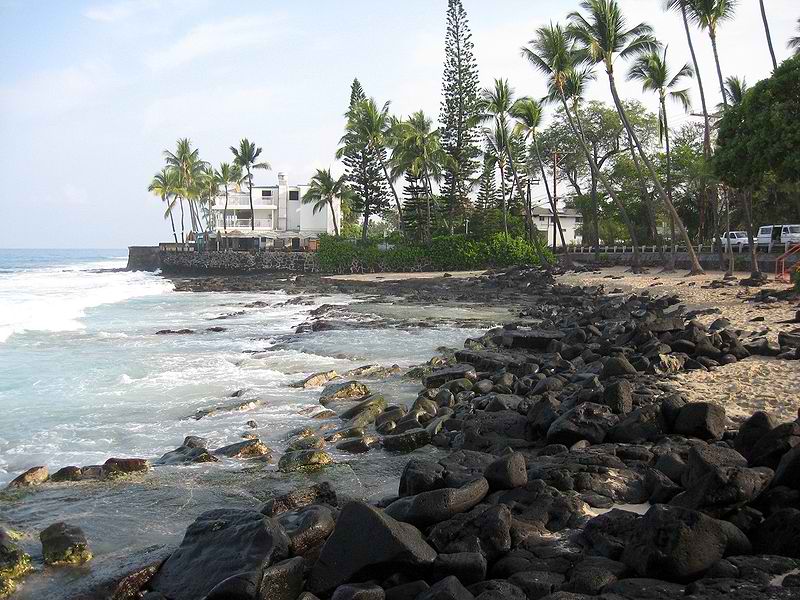 The second one is the most common black sand beaches. These beaches are mostly found on the east side of the island on the Puna-Ka’u coastlines. Some of the popular and local favorites for these are Poho’iki Beach, Kalapana/Kaimu Beach, and Punalu’u Beach. Once a beautiful and favorite beach park enjoyed by many locals (me included) with swimming, snorkeling, surfing, and fishing, parts of the Poho’iki Bay were covered by lava from the May 2018 eruption that destroyed many houses and changed many people’s lives overnight. Even though most of the bay area is now a long massive stretch of black sand mounds, people can still enjoy swimming in the little bay area that is now like a pool, and people can also enjoy surfing out in the open sea as done before. Another beach is the new Kaimu Beach. Once called Kalapana, Kaimu beach is a new black sand beach where the old Kaimu Beach and Kalapana Beach once existed. These beaches were covered by the 1990 lava flow that destroyed and partly buried most of the towns of Kalapana and Kaimu. Both original beaches are now buried beneath more than 50 feet of lava. Although the lava flow has created a new coastline, it is still nowhere near the beauty these beaches once possessed. The new Kaimu beach is not recommended for swimming as it is yet still forming its coastline into a beach, but it is definitely a spot to visit for those who seek a spiritual power spot and want to feel the wonders that Madam Pele has to offer. And lastly, the black sand beach of Punalu’u. Located in the Ka’u coast between Pahala and Na’alehu, it’s one of the most popular black sand beaches on the island. At the beach, you can swim, snorkel, hike, camp (if you have a permit), or have a picnic. You can also see a lot of the Hawaiian green turtles called Honu either swimming around, feeding between the rocks or just simply basking in the sun on the beach. Just as a warning, you are not allowed to touch or feed these turtles as they are protected by our Hawaiian laws. 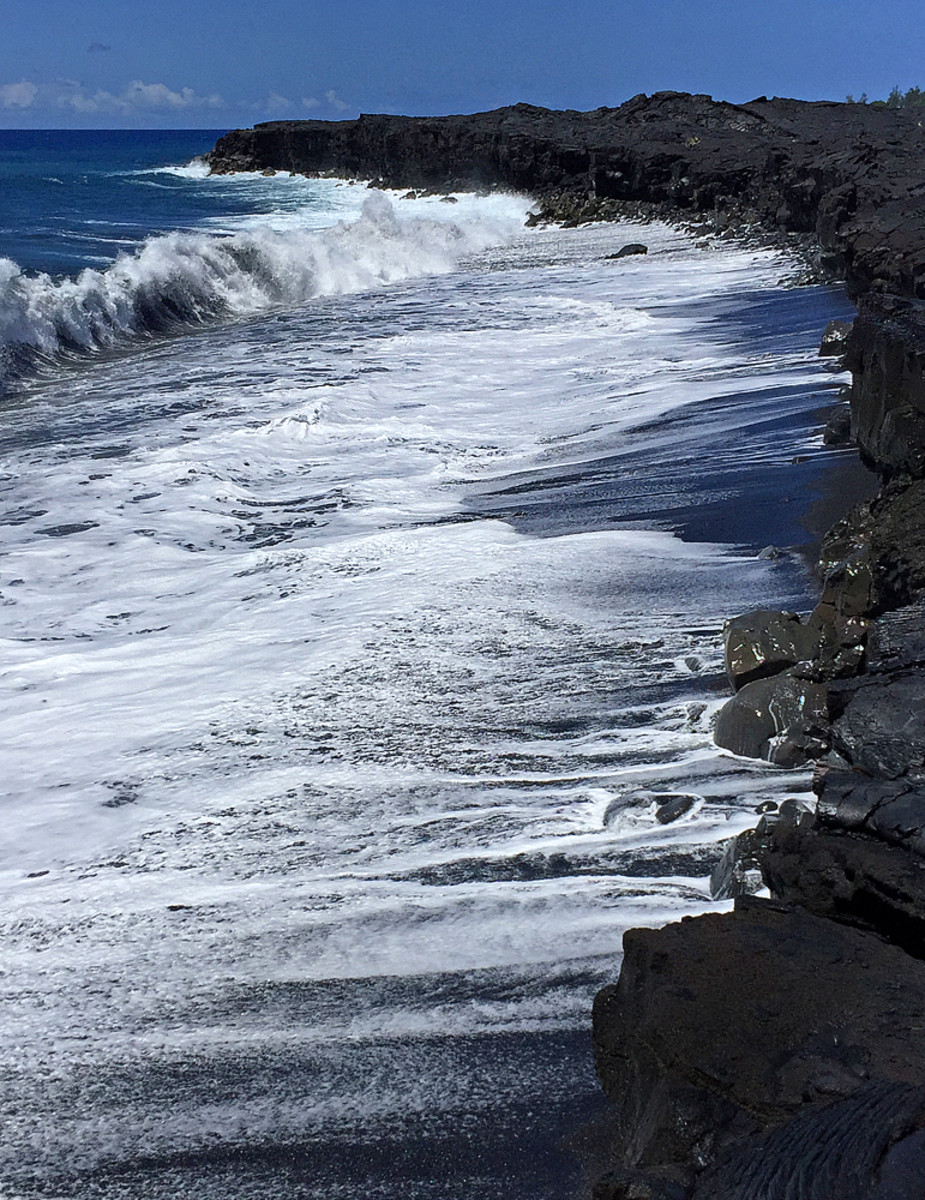 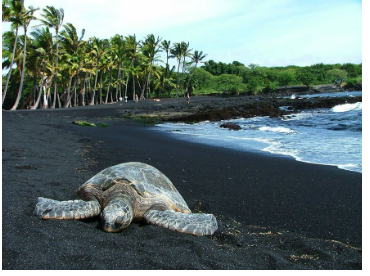 Finally, the third one is the most unusual green sand beach. Known locally as Papakolea, it is also called Green Sand Beach by others. Located in the Ka’u district of the most southern part of the island, the beach is made up of minerals called olivine that were produced during an eruption 49,000 years ago. Once a cinder cone was formed, it was found to contain green crystals called olivines. At this beach you can swim, but it is not recommended due to its strong surf and lack of any lifeguards in the area. Basically, you swim at your own risk. In order to get to the actual beach, you need to hike about two and a half miles along a dirt road from a designated parking lot, then go down a very steep path that leads to the bay. Out of the three different colored beaches, I’m most familiar with the black sands as I am born and raised on the east side of the island. However, I do enjoy traveling over and between the mountains to spend time at the white sandy beaches during holidays and vacations from work and school. As for the green sand beach, I’ve only been there once for a Hawaiian Studies class I was taking. The beaches that I go to the most and enjoy a lot are Carlsmith Beach (also known as Four Mile) located in Hilo and Hapuna Beach located on the Kohala-Kona coast. If you are looking for a good beach to go to and enjoy, I definitely recommend these two. 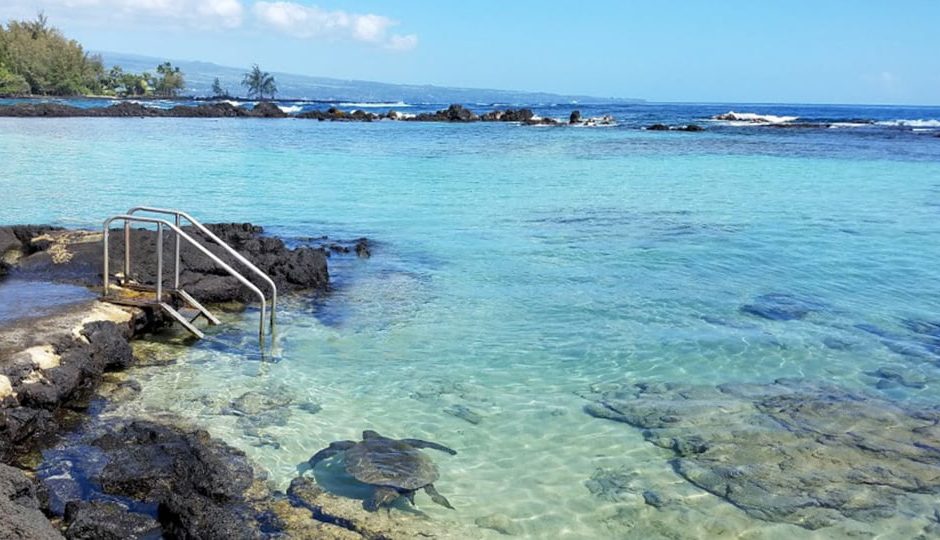 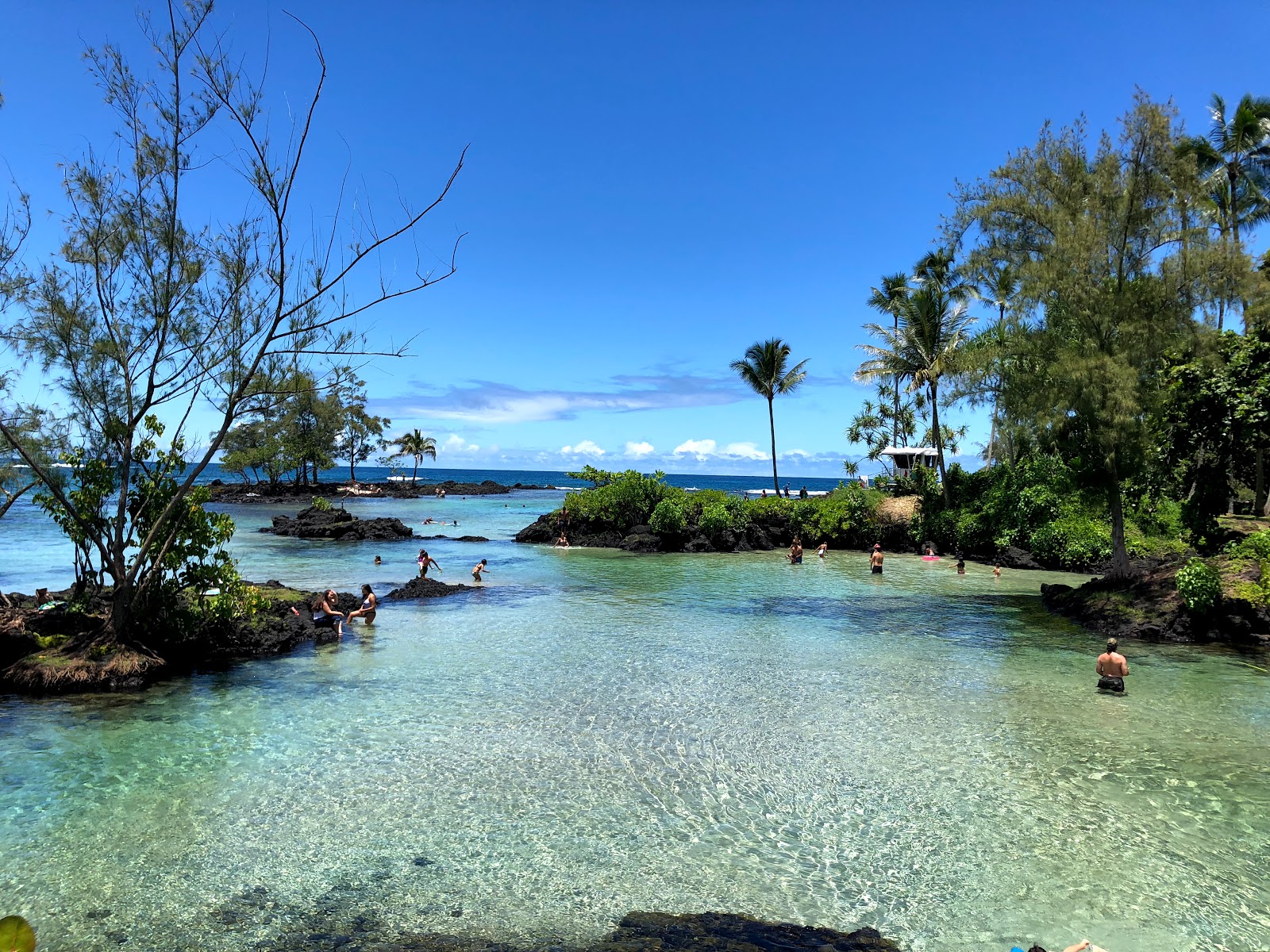